Are You Really Sure That A Floor Can’t Also Be A Ceiling?

Are You Really Sure That A Floor Can’t Also Be A Ceiling?

Coming from a master of enigma, M.C. Escher’s question is not unreasonable. His complex upside down, inside out world created phantasmagoric universes and planes. Though we tend to physically inhabit six, Escher’s vision occupied many. In his topsy-turvy cosmos, the imagination defies probabilities and redefines possibilities. Had Newton not discovered the concept of gravity, who knows-perhaps we would be living a more Tim Burton, Escher-like existence.

Though not as radical in his imaginative flight, the great 18th Century architect cum designer Robert Adam also saw inherent creativity in paralleling planes. Whether by intentional illusion or belief, Adam drew commonalities between floors and ceilings. A more humanistic vision and perhaps a more contained one, Adam paid homage to both through verisimilitude, recreating the floor on the ceiling and the ceiling, the floor. It made the occupant of his rooms feel both regal and comfortable. How so? The inhabitant feels comfortable with the familiar and at home with consistency, however ornate or complex the decoration. Thus, the floor plays an integral pare to the interior composition of any room.

Floors, unto themselves, present various interesting functional and aesthetic alternatives. Not only in its design, but also in its material substance, a floor’s artistry is confidently expressed. Flooring is the very foundation of design; it is for many designers, the first element to be chosen. Whether stone, wood, plastic or material, flooring grounds us, literally. And, as the most used of the planes, it requires the most maintenance. Less spiritual than our fore-bearers who looked up and sought solace in the religious workings of God in churches. The modern zeitgeist reflects, if you will, a less spiritual perspective. We now look down. Thus, the importance of the floor. Perhaps giving us more assurance in a Newtonian universe, modern man, though not always downtrodden, focuses on what is below his feet. A more physical world necessitating a more secure step, man’s existential existence requires his desire for stability and constancy below. Not a spiritual Milton nor a modern Sartre, Robert Adam, a humanist supreme, sought to marry this spiritually to an enlightened world.

Perhaps the greatest area of imaginative exploration in flooring is that of tile- ceramic, glass, natural stone (marble or granite), porcelain or agglomerated. From reducing giant slabs of stone to tiny mosaics or mimicking its look in large ink-jetted .12 x12’s, the use of tiles is functionally and aesthetically expansive. As Joshua Levinson, president of Artistic Tile, notes in mirroring Napoleon Hill: “Tile now has such a wide array of materials and aesthetics that anything you can conceive, can be realized.”

One’s options are as unlimited as your imagination. Technology has developed to the point that differentiating between a manmade porcelain and a natural stone is extremely difficult to determine. The Romans, no foreigners to stone, found it a very pleasing and effective surface material with which to decorate their floors and walls. In bringing the stone look and feel of the outdoors in, the ancients married exterior landscape to interior decoration. It is not unusual to find stone or tile as the flooring of a master bedroom. In warmer climes, it is particularly common due to its effectively retaining cool air. Tile floors are also very easy to maintain, a quick wipe down and most superficial grime is removed. Keep in mind though not to leave too much grout space between tiles or slabs; dirt tends to collect there, making for an ugly floor. Tightly set and usually laid on the diagonal, a stone floor is clean, neat, and expansive. Perhaps one of the most elegant of floors is the black and white marble pattern. Oftentimes used in entry foyers, a white Carrera floor with black diamond inserts evokes a strong sense of presence, be it modern or traditional. It is timeless and so inimitable of Escher’s chimerical universe.

Does your stone floor create the proper effects and flow?

Do you need advice on how to create a most functional and aesthetic floor? 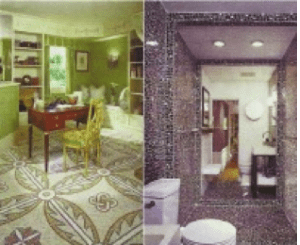