Eyes Are The Windows Of The Soul: Doors The Portals Of The House

Eyes Are The Windows Of The Soul: Doors The Portals Of The House

Similarly to “the eyes being the windows of the soul,” doors are the portals of the house through which one experiences a change of landscape, an insight into the beyond. Not exactly an “Alice in Wonderland” experience, but a transformative one, where the homeowner sighs with relief that they have finally arrived- home! Doors, whether entry or interior, create this passage, where the individual unhinges from his daily toils and enters another world, hopefully one of comfort and sometimes of surprise. That, I suppose, is the “Wonderland” feature of doors; we are never quite sure what lies on the other side.

As an outsider, doors are very symbolic for what lies beyond. It is a preview, if you will, of the style and métier of furniture, furnishings, architecture, and way of life within. Doors define spaces; they separate and distinguish one from another. They divide the exterior from its interior, and one room from another. In this sense, they function as moveable walls which are hinged, tracked, concealed, divided and applied with as many types of materials as the imagination can divine.

But here’s the rub. They don’t just function as portals from one vista to another; they are themselves symbolic of what lies beyond and within. So, when one sees a concrete door, one perceives resistance, an unwelcome entry to probably an unfeeling, cold interior. It is foreboding; it says “enter at your own risk.” Conversely, a glass door parlays a feeling of lightness and transparency. But lest this observation seem too obvious and simplistic, think again. What we live in is representative of ourselves, doors included. Having said that, these windows to the soul of the house can be broken down by purpose, material and, finally, by style.

In terms of purpose, there are exterior doors, separating the outside landscape from the interior of the house. Then, there are interior doors. These are more malleable, separating room from room and room from its contiguous space. And then there are doors, like those in the Winchester house, which lead to nowhere. Doors are generally used however for privacy, security and safety.

As far as door types are concerned, the options are numerous. The most obvious and common is the single panel, one sided hinged door with single knob. Then, there are sliding doors (these slide over each other when open and are closed when fully apart), French doors (which split the door in two vertically, very elegant and romantic), the Dutch door (which split the door in two horizontally, a Vermeer type permitting people to feed the animals outside without having them come inside), pocket doors (which are so elegant as they slide themselves within the walls and present themselves together, meeting halfway when closed). Concealed, false, or ‘blind’ doors don’t let you know they are doors: there aren’t any frames, hardware or structures to lead one to believe it is, in fact, a door. It simply blends in with the walls. And, then, there are doors for man’s best friend: a little opening at the bottom of the door through which Fido comes and goes at will.

As many types of doors as there are there are the materials out of which they are composed. Doors are commonly made of wood, but they can be also made of the following: glass, metal, paper, mirror, stone, marble, granite, concrete and fabric (hung by a pole) and any combination thereof. In the accompanying photo of a pair of pocket doors to a den designed by Green & Co. and fabricated by William Somerville Cabinetry, NYC, there is mirror, sandblasted glass, and wood with panels and reveals. In the picture below by David Estreich, Architects, is a pair of entry doors composed of stainless steel, sandblasted stainless steel, clear and colored cast glass and nickel.

Though the diversity of doors in form, style and materials is endless, one thing is for certain: they create a metaphorical experience for the user and object. Perhaps not as psychedelic as Huxley’s mescaline experience in Doors of Perception, from which Morrison was duly inspired. Bener suited here is William Blake’s thought in The Marriage of Heaven and Hell from whom Huxley’s title was inspired, where, “If the doors of perception were cleaned every thing would appear to man as it is, infinite. For man has closed himself up, till he sees all things through narrow chinks of his cavern.” These cleansed doors, like the final frontier, give man hope of a better vision beyond, of surprise and delight, of elements of wonder and happiness that await him. 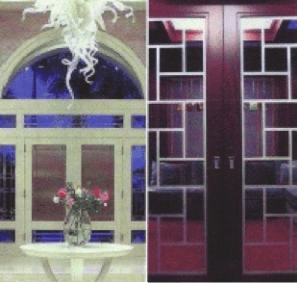